“Occupying the Toilet but Not Shitting”

There’s a phrase in Chinese that literally means “occupying the toilet but not shitting.” The phrase “占住茅坑不拉屎” used by a character in the 1997 movie “Eighteen Springs” (半生缘) to describe a man courting Anita Mui’s character. It’s a long-standing idiom, and if you look it up on Baidu dictionary, the definition it will give you is “dog in the manger”. In the metaphor and the story, a dog occupies a manger while not eating the grain but preventing the horse from eating the grain.

Yesterday there was an article on Ecns.cn about people who occupy parking spaces with beds or chairs so that they can keep the parking spaces for themselves when they aren’t using them. Although these people do intend to use the parking spaces later (unlike the dog in the manger), the phrase ought to fit. Someone occupying a toilet while not using it could indeed use the toilet later. The people occupying a parking space with a chair have no need for the spaces at the time, and others have a need. (That you need to use put something there to occupy the space proves that much, and you are only making the parking shortage worse.)

Here’s the first photo from Ecns’s slideshow, and click here to see the rest. 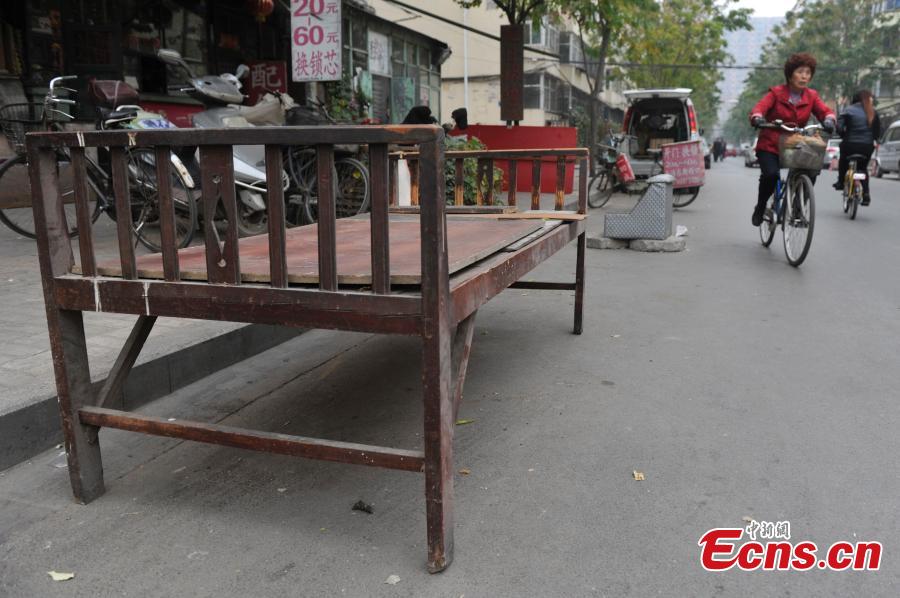 Chinese Woman Wanders 1,900 km Away After Getting Lost Buying Groceries

A trip to buy vegetables turned into a 40 day odyssey for one 50-year-old woman.

The small town woman left her home in Nanning, in the southern province of Guangxi, and ended up in Kunshan, Jiangsu, about 1,900 km away (1,100 mi), 40 days later.

How did it happen? According to Nanjing’s Yangzi Evening Post from Oct. 29 (where it was the front page story), the woman recently moved to Nanning where her husband was working and went out to buy vegetables. After getting lost, she kept walking east because she thought that was the way home.

Analyzing The Aftermath Of The Ukraine War

Ukraine is negotiating a cease fire after covert Russian troops pushed back Ukraine’s advances on rebels. The war apparently ends with Russia having taken Crimea and having turned eastern Ukraine into an ungovernable region.

Was this Russia’s goal? Does Russia spell trouble for other Eastern European countries?

Also, read their recent op-ed on the matter at:
Ukraine: The End of History is Still a Long Way Away

– How moderate is the Free Syrian Army really?
– Does ISIS really pose a direct threat to the United States and Europe?
– Should other regional powers play a greater role?

Hear why Maitra thinks that America should leave it mostly to Iran and Egypt.

While we’re on the subject of Hong Kong, it just so happens that the latest issue of map magazine came out yesterday, and I have an article in it describing the beautiful secluded beaches of Sai Kung Country Park in Hong Kong.

Hong Kong is best known on the mainland as a “shopping paradise”, but I like it more for the rickety wooden bridge made of planks and poles tied together by rope at Ham Tin Wan Beach.
…
Along the shores of Sai Kung Country Park, bays and covers hide in jagged corners, pristine beaches remain sparsely occupied, and fishers live on boats in the water. Located 20 miles to the northeast of Mong Kok, the brightly lit shopping district that was ranked by Guinness as the most crowded place in the world, Sai Kung Country Park is on the easternmost tip of the New Territories. The beaches of Tai Long Wan Bay are among the most beautiful and least crowded in Hong Kong. …

Other recent articles I have written:
Ukraine Proves The End Of History Is Still A Long Way Away – Daily Caller
US needs to be vigilant, not panic about terrorism – China.org.cn

Graffiti in China: A night painting with Zhuzhou’s only crew